I am excited to share that our first Mindful Monday guest writer is my nutrition gal pal and fellow Nittany Lion, Talia Follador. Read on to learn more about the assumptions, we make about weight, health, and eating, and what we can do to be more mindful about these topics.

Four Assumptions about Weight, Health, and Eating that We Need to Extinguish

With a roughly $60 billion dieting industry, increased reports of body dissatisfaction, and endless attempts to lose weight, it’s clear that people in 21st century America are obsessed with appearance and dieting (1-4). Is this obsession warranted, or does the research tell us otherwise? Read on to learn about the four ideas I think we need to stop assuming in order to promote a healthier, happier world.

1. Stop assuming that complimenting/praising weight loss or slimness is always a good idea.

This one holds true for both genders, but it’s especially applicable to women. Compared to males, females are shown across studies to have greater perceived pressure to be lean and drive for thinness. Both of these factors have been associated with decreased body appreciation and increased body dissatisfaction, disordered eating, and BMI (5-8). Besides, have we not already realized that women can accomplish so much more than just looking good? Like…I dunno…being super awesome doctors, politicians, engineers, teachers, mothers, nurses, etc.?

Additionally, complimenting someone on weight loss without knowing the whole story could, in fact, be praising unhealthy behaviors or undesirable life situations. Weight loss can be achieved via severe food restriction, over-exercising, a loss of appetite due to psychological stress, food insecurity, or as an unintentional outcome of diseases such as cancer.

Instead of praising weight loss or a slim physique, how about reminding the people in your life that they are more than just a body? Complimenting appearance is so cliché — get creative! Try complimenting people for excelling in a difficult class, earning a job promotion they worked really hard for, or just generally being a kind, smart, interesting human being.

All things considered, I believe telling a woman she’s beautiful will never go out of style. Just make sure that she knows she’s so much more than that!

2. Stop assuming that being restrictive or critical about children’s food choices will promote desirable eating behaviors.

Scolding children for eating “too much,” completely banning “bad” foods, and criticizing food choices may seem instrumental in encouraging children to practice what we deem as healthy eating behaviors; however, research indicates that these practices may do just the opposite. Studies continually find associations between restrictive or critical caregiver eating messages in childhood and negative outcomes in adolescence/adulthood, including decreased body appreciation and intuitive eating and increased disordered eating and BMI (6, 7, 9). While numerous other factors contribute to these relationships, these findings definitely don’t promote restrictive or critical eating messages.

We can all agree, no?

Some studies have found associations between weight loss and decreased depressive symptoms but have been criticized for a lack of generalizability. Unlike real life practice, a team of healthcare professionals continually supported the study participants throughout the process (10,11).

Studies focusing on weight loss in a more representative manner have varied findings. One found both a 5% weight loss and a worsened psychological state at follow up assessments, even in individuals who were overweight or obese and observed an improvement in hypertension and triglyceride levels (12). Another found absolutely no correlation between improved mood and weight lost, although symptoms of depression did improve with increased exercise and diet modifications (13).

Highlighting the importance of distinguishing between correlation and causation, another study exhibited that weight loss predicted depressed mood, but depressed mood also predicted weight gain (14). Thus, psychology and weight definitely interact with each other, but the relationship is not completely understood.

Does your weight or body shape directly increase or decrease your overall happiness? Probably not. We all know deep down that just looking at a person doesn’t paint the whole picture. Weight loss can be achieved in healthy, sustainable manners; however, as previously mentioned, it can also be achieved by severely restricting food or over-exercising, in turn isolating a person from aspects of their life that bring them happiness. Additionally, weight loss can be an unintentional and undesirable outcome secondary to a condition or disease.

What truly makes you happy?

4. Stop assuming that people are healthy based on their weight or body size.

Various epidemiological studies have found that the life span of overweight and moderately obese people is about the same as normal weight people, with overweight people sometimes even living longer. An analysis of U.S. population data found that people in the overweight BMI category actually have the greatest longevity (15-18). Further, using blood pressure, cholesterol, glucose, insulin resistance, and C-reactive protein data from the 2005-2012 NHANES, authors of a recent study estimated that 74,936,678 U.S. adults are incorrectly classified as cardio metabolically healthy or unhealthy based on their BMI. Specifically, 29% of obese individuals and 16% obesity type 2 and 3 individuals were metabolically healthy, while 30% of normal weight individuals were cardio metabolically unhealthy (19-27).

There are, as always, confounding factors that influence these findings, which researchers can’t perfectly control. Thus, I’m not implying that people should gain weight; rather, I’m saying that just because someone is in a larger body doesn’t automatically implicate they are unhealthy or destined for premature death.

When evaluating someone’s health status, it may be better to look at the whole picture: fitness, eating habits, sleep, psychological stress, etc. The problem (if there is one) might not be weight at all. It might be behaviors, which sometimes manifest as a change in weight and sometimes do not.

Did any of this information surprise you, or did it just confirm what you already practice? Either way, I hope it encouraged you to challenge some assumptions you may make about health, weight, and eating!

5. Denny K, Loth K, Eisenberg M, Neumark-Sztainer D. Intuitive eating in young adults. Who is doing it, and how is it related to disordered eating behaviors? Appetite 2013;60:13-19. 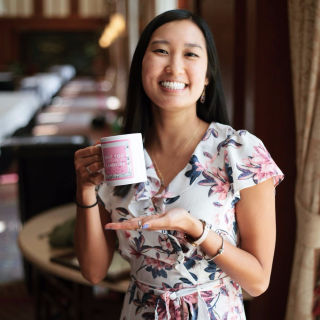 Hello + welcome! I'm Jenny, a Registered Dietitian, equal lover of brussel sprouts and tacos, and food pun enthusiast. I believe that all foods can fit into a healthy lifestyle. Here you will find tasty, seasonal recipes and information about nutrition and health.